Waiting for eight hours to be up close to your idols and frantically moshing to classic tracks when the nostalgia overwhelms you. Sounds like the work of a hardcore fan.

This was my behaviour when I saw Muse at the O2 arena, where they proved exactly why they are ‘The Best Act in the World Today’ according to Q magazine readers.

Despite them being one of my favourite bands, this was the first time I’d seen Muse. It was definitely worth the wait to be in prime position for their second sold-out show at the gargantuan London venue.

To say that the two-hour performance was extravagant would be an understatement. The giant half moon stage was alive with lights and lasers, while a massive inverted pyramid screen formed the heart of a spectacular visual display.

Even as the stage was set up, everyone ‘ooh-ed’ and ‘aah-ed’ as the lights were tested. Then came the stomach-somersaulting moment when we were plunged into darkness.

It was as if the aliens had landed as ominous red lights flared to the angelic chorus intro of ‘2nd Law: Unsustainable’. As Matt, Chris and Dominic emerged they were greeted with a wave of wild screaming and applause. They formed an inward facing triangle and broke down for an instrumental explosion of bass, Matt showing that he certainly can do dubstep on his guitar. 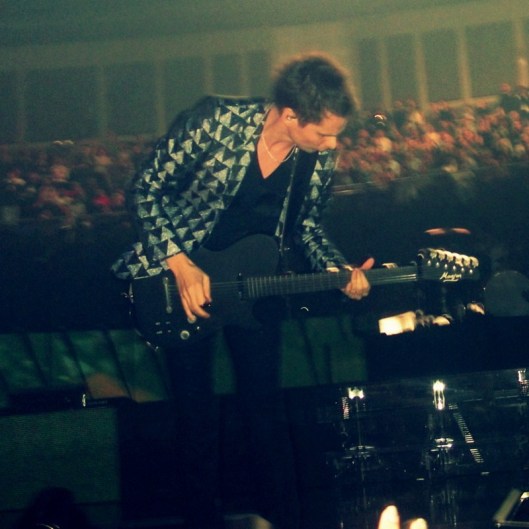 Bellamy strutted out to the audience during ‘Supremacy’ and we all joined in as he sung his first words. Dominic and his drums went for a spin during ‘Map of the Problematique’ and the pyramid made its eerie descent for funk-filled ‘Panic Station’.

The trio provided a bombastic compilation of oldies like ‘Time is Running Out’ and ‘New Born’ alongside fresh tracks from their new album, The 2nd Law. ‘Madness’ translated excellently live with its electronic vibe and ‘Follow Me’ saw Matt oozing with passion.

They’d thought of every detail, from the live footage on the screens around the roulette wheel stage, right down to Matt’s animated sunglasses. Muse took us back to their first album for a beautiful rendition of ‘Falling Down’, complemented perfectly by Matt’s grand piano which lit up for each note.

In true rock star style, Bellamy came down to shake hands with the fans during ‘Undisclosed Desires’ and we squished up to the barrier to try and reach him. ‘Plug in Baby’ followed and of course things got a bit moshy – completely wedged, we pogoed away to the classic track.

When you’re Muse, why have one encore when you can have two? In their first, the pyramid reverted itself during ‘The 2nd Law: Isolated System’, while ‘Uprising’ had us fist punching and Olympic anthem ‘Survival’ got Matt on his knees for some epic guitar solos.

Back for round two, ‘Starlight’ turned into the loudest sing-along you’ve ever heard as “Our hopes and expectations, black holes and revelations” echoed around the building.

Chris’ harmonica ripped through the air waves we knew how things were about to go down. They rocked ‘Knights of Cydonia’ in an awesome finale of head banging and face melting riffs.

A feast for the eyes and ears. I just have no idea how they’ll be able to top this exhibit of sheer musical brilliance.