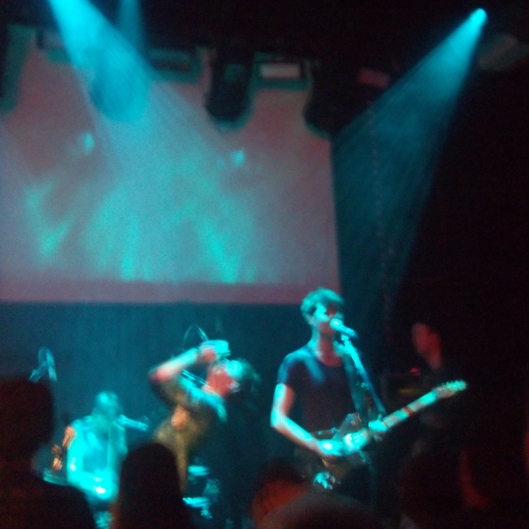 The evening was a musical cocktail of genres with a hint of rock, a splash of electro and a healthy dose of indie-pop. Supporting Citizens! was Brighton-based Great Pagans who warmed-up the stage with some feel-good guitar riffs. Then came IYES, a Brightonian electronic duo who blew me away with their poignant male vs female vocals over chilled out synthy beats, reminiscent of The XX.

The pop-tastic sound of Citizens! erupted from The Haunt’s stage with the twinkly ‘Caroline’. The five-piece let their blood run cold with ‘Reptiles’, and speaking of which, lead singer Tom’s jazzy green shirt looked suspiciously similar to that of reptilian skin…coincidence? From then on they played track after chirpy track from their debut album ‘Here We Are’, produced by Franz Ferdinand front man Alex Kapranos.

Tom showed off his eerie pitch-bending vocals when he took to the keyboard for ‘I Wouldn’t Want To’ which morphed effortlessly into the disturbingly catchy ‘She Said’. Tom sounded slightly creepy as he uttered the words, “You’ll taste heaven, you’ll taste hell” over the vibrato tones and bubbly bass.

I was taken on a trip back to the 90s with their rendition of ‘I Miss You’ by Sade, which translated perfectly to their style. Tom got involved with the audience for ‘Monster’ by casually wandering into the crowd singing “The more we look around, the more we see that it’s really made a monster out of me.”

Citizens! oozed with emotion for their first single ‘True Romance’, a song that starts with quaint piano chimes and builds into an intense pop fanfare as the words “Tell me what was I thinking when I let you go” linger on. They brought in the crunchy bass for their final track, the brazen ‘(I’m In Love With Your) Girlfriend’. The strobe lighting went mental as Tom rocked the epic breakdown where he repeatedly reminded us “I always want the things that I can’t have”.

Well, they may not have their mate’s girlfriend but they certainly had an excellent gig.