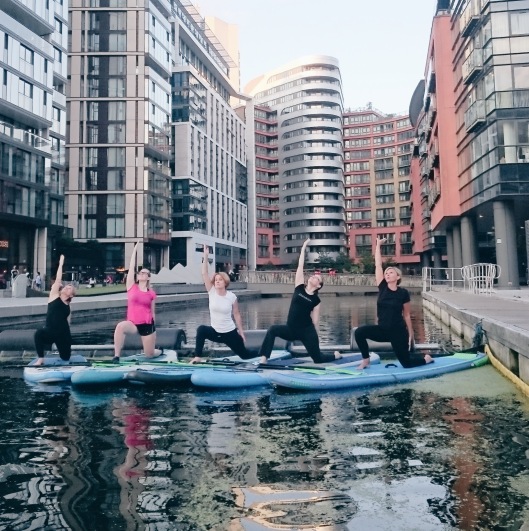 As I carefully made my way into child’s pose, I let out my first sigh of relief since I’d left the office. Then I heard the sweet sound of chirping ducklings, paddling a few feet away. I just wanted to bottle up this blissful moment. Such a contrast to a few moments before.

I’d planned my journey so that I could arrive 15 minutes early for my SUP yoga class with Active 360, as suggested. However, London transport has a way of messing up the most important of arrangements. So I rocked up half an hour late, slightly worse for wear, but as soon as I stepped into the Paddington Basin area, the sight of the calm canal, and the dulcet tones of a man playing acoustic guitar, melted my frustration.

Luckily a member of staff was on hand to give me a board, and I paddled over to the class. I managed to pick it up quite fast; I’d done SUP thrice before, and yoga for 5 years, so I was doing downward dog – and mooning nearby bar-goers – in no time.

Not that it was easy. I had to focus all my efforts to balance the poses, and use every muscle in my body to stay afloat. I couldn’t actually believe some of the manoeuvres our talented SUP yoga teacher Jen got us doing, and it wasn’t long before I’d mastered a sun salutation sequence. I just pretended I was back in the yoga studio to make it seem slightly less perilous.

It was ideal being in such a small group. It did make me chuckle when a pink-haired woman announced to her two friends that she was removing her fake eyelashes and sticking them to the board for safe keeping.

As we progressed, the poses got more and more taxing. I nailed the devilish one-legged king pigeon pose on the right side, but when it came to the left side, I made one wrong move and into the water I fell. Head under and all.

It was actually quite refreshing on such a warm evening. Thankfully my glasses stayed on my face! The pink-haired lady wasn’t so fortunate when she fell in. Her fake eyelashes were nowhere to be seen, much to her dismay.