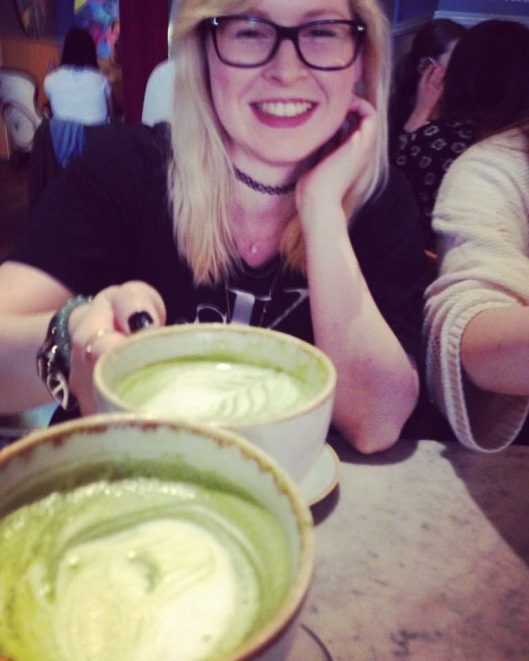 This guilt-free beverage has been painting Instagram green over the past few years. Those who know me will have noticed I’m obsessed with matcha tea. When I quit coffee 3 years ago, I needed something to fill the void. That’s when this delicious green nectar came along.

If you’re new to matcha or want to know more, read my post 8 ways matcha makes your life better.

Now that’s all cleared up, here are the top 6 places to get your matcha fix. There’s also a handy matcha map of London at the bottom, so you can plot your next latte. 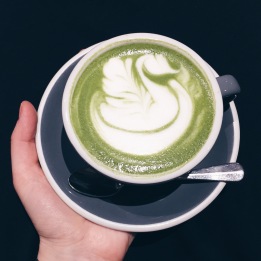 Just look at that frothy masterpiece. TimberYard’s sumptuous specimen has the perfect ratio of matcha to milk and can be quaffed with soya or almond if you prefer. Curl up on a sofa chair of your choice and they’ll bring you your matcha latte on a wooden slab, with a bottle of tap water. The only negative is this cafe is a hotspot for freelancers, so be prepared to sit elbow to elbow at its busiest times.

2. The One of Many Colours
Farm Girl: Portobello and Chelsea
£3.70 (£4.10 for hibiscus or butterfly lattes) 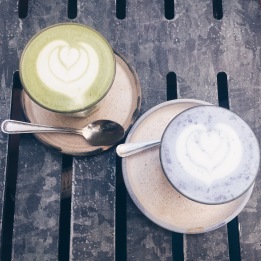 Before I get distracted by all the pretty colours, Farm Girl’s matcha latte is made with organic Japanese matcha powder and tastes perfectly creamy with almond milk. Although not technically matcha, why not try their blue ‘butterfly latte’, made from the dried flowers of a butterfly pea plant? Or their pink ‘hibiscus latte’? The downside of the Portobello cafe is there’s usually a queue (they don’t take reservations), but it’s definitely worth the wait.

Palm Vaults do take reservations, and they’re essential. The first time I rocked up to a full house and had to ‘make do’ with a matcha to go – a very respectable latte served in a seriously trendy cup. Palm Vaults is definitely the most Instagrammable on this list, with their retro theme and pink and green colour scheme. The next best thing to their matcha is their Thai butterfly tea named ‘blue moon’. Or if you’re caffeine fiend, try one of their colourful coffees like their ‘red velvet latte’ or ‘violet latte’.

Imagine a Japanese restaurant, away from the hustle and bustle of the city. It has a minimalist vibe with an air of calm. The owner of this gem, Atsuko Inoue, was inspired by her father and grandfather who ran a hotel in Tokyo. So of course an authentic establishment such as this would make a mean matcha – and very reasonably priced. Be sure to try some of their matcha ice cream while you’re here.

If you’re matcha mad like me, Tsujiri is a must. From sundaes to shaved ice, it’s the only place I’ve come across selling exclusively matcha products (and a bit of mochi). Their latte is mouth-wateringly good, as you’d expect, but for a taste of the tea houses of Japan, sample their more traditional option. The ‘O-matcha’ – I can only assume the ‘O’ means ‘original’ – is prepared with ceremonial grade matcha from Uji, Kyoto (the good stuff). There’s no milk in it, so only attempt if you appreciate its bitterness.

6. The One
Tombo: South Kensington, Fitzrovia and Soho
£3.85

Tombo is Japanese for dragonfly 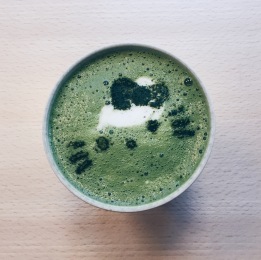 From their Hello Kitty pop-up

This is my absolute favourite. An utterly divine matcha. And you get quite a lot of latte for your money. Tombo’s extensive list of matcha treats rivals Tsujiri’s, but also brings cake to the table. The matcha gateau is something else. You can also enjoy a Japanese take on afternoon tea, with an tantalising selection of sushi and matcha desserts. To top it off, it has a warm, friendly vibe and exquisite Japanese food.


Why are you still here? Go get yourself some matcha…

What do you get when you combine scorching heat, frequent raving and amazing music? Pukkelpop Festival: the sweatiest, dirtiest, most exhausting experience of my life.

UV-ed up for Chase & Status

Not only was it my first time at one of Belgium’s top music festivals but my first time at a camping festival. Now I’m not really the roughing it type so this was quite a challenge for me. I don’t think I got much sleep over the three days, but luckily I was able to wash away the grime every day – after an hour wait for the showers! 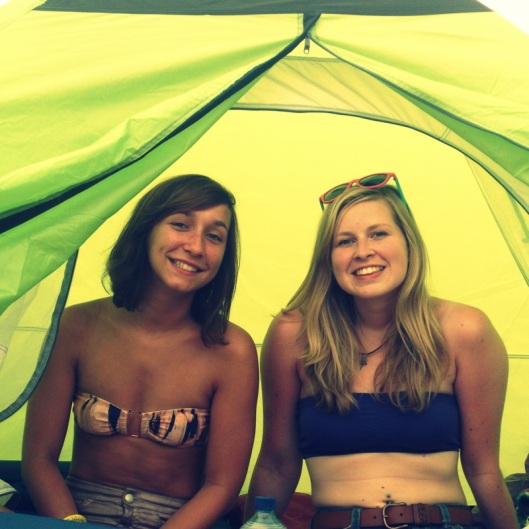 However, the benefits definitely outweighed the costs. With an excellent range of rock, pop, dubstep, hip hop and acoustic on 8 different stages, I was able to see a plethora of brilliant acts. One minute we would be bouncing around to Chase and Status amongst thousands of people and the next we would be enjoying the dulcet tones of Daughter in an intimate tent setting.

There really is nothing like the festival atmosphere. Everyone was just so happy and friendly; it seemed the Belgians especially wanted to talk to us to practise their English! Although we went to a foreign festival to escape the English crowds, it was still nice to hear some familiar words. Whenever we heard some English in the campsite we would communicate by calling out “ENGALAAAND!!!” 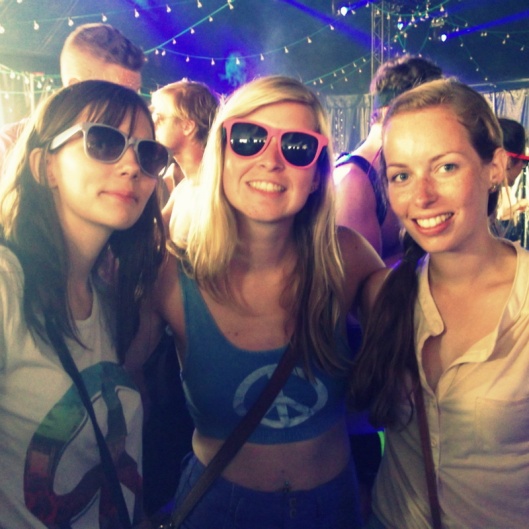 In the Boiler Room aka the DUBSTEP room

The Belgians were no strangers to chanting either. We would be casually watching a DJ and they would start shouting “HEYYYY HOOOO” over and over. It was like verbal moshing since they started up this chorus when the songs got good. Musically so much happened over the course of the festival so I’ll sum up my most memorable moments.

Major Lazer’s set has to be my main highlight. Imagine hundreds of sweaty festivalgoers raving in a tent in 30 degree weather. Imagine that sweat dripping into your eyes and spraying about as you jump and clap. Now imagine track after amazing track of reggae dance, complete with stage diving and zorb surfing (one of them got into a zorb ball and literally rolled over the audience!). There was even an erotic lap dance for a lucky member of the audience as they played ‘Pon de Floor’. We didn’t care that we were bathing in our own sweat and exhausted from the constant bopping, the music just kept us going. Now that’s what I call in-tents.

Most surreal and emotional moments

Straight after Major Lazer came a 2 minute silence for the victims of the Pukkelpop storm 2011 – a shocking contrast to the energy of the hour before. It was like a ghost town. Not only could you hear a pin drop but everyone was completely still, as if time had been frozen. Many of the acts paid tribute to the victims of the previous festival, most memorably of which was The Foo Fighters. The Foos were set to play at the 2011 festival but disaster struck and it had to be cancelled. Dave Grohl talked about their experience and created an emotional build up to ‘These Days’, dedicating it to those who couldn’t be there. The Foo Fighters by the way were incredible and played a mammoth 2 and a half hour set!

It has to be The Black Keys. I discovered them ages ago as one of their songs was on the Twilight soundtrack (I apologise) and since then I’ve become very attached to the Ohio duo. There’s just nothing like them around at the moment. I’m a sucker for their up-tempo rock and roll sound with its rough guitars and catchy riffs. The atmosphere was amazing at the main stage as everyone sung along to the da-da-da-da-da’s and ohhh-woah-oh-oh’s. I couldn’t help bouncing around as I belted out every word. They didn’t need any fancy gimmicks; they just let their music do the talking.

Most bass in your face act 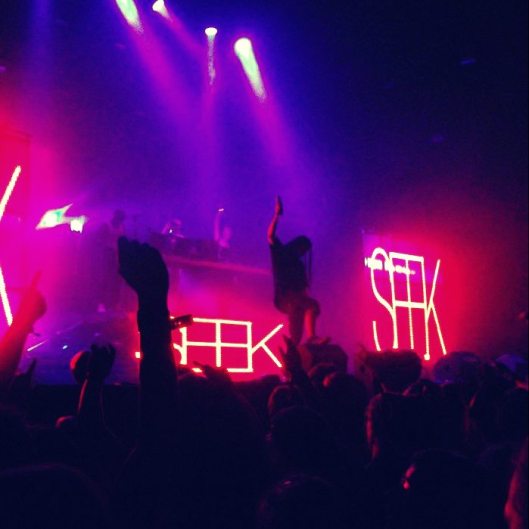 As soon as Magnetic Man’s beats erupted, people were shoving their fingers in their ears to stop their eardrums from vibrating and the weaker ones had to evacuate. Someone even got a nose bleed. They obviously couldn’t handle the dirty bass. My friends and I however were raving away at the front loving every drop. The floor felt like a trampoline when everyone jumped at once! There were even live performances from some of their featured artists including Ms Dynamite and P. Money. Just amazing. It was a great way to end the festival.

I’d also like to mention and thank Tinie Tempah for the nostalgia, Flux Pavilion for ‘letting the bass canon kick it’, Bjork for the surrealism, The Stone Roses for being epic, Chase and Status for the crowd explosion (they made everyone get down on the floor and jump up when the beat dropped), Bassnectar for a hearty dose of bass and Snoop Dogg for, well, being Snoop Dogg.

The Stone Roses – in prime position!

Overall, it was a brilliant first festival. I think I actually preferred the heat to a wet and muddy alternative in the UK. Sunshine and live music, what more could you want?!