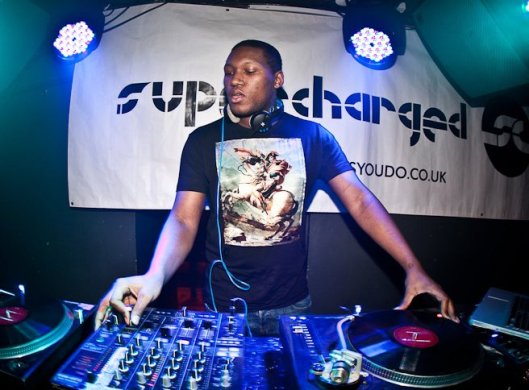 Audio is the perfect venue for dubstep. There is something about being in a smoky underground club with like minded individuals raving to heavy bass. Previous producers and DJs to grace its decks have included the likes of Scratch Perverts, SBTRKT and none other than Rusko. Ever since I attended Audio’s Supercharged night to see Drumsound and Bassline Smith I have been hooked. After seeing the excellent line-up for 2012 I didn’t hesitate to head on down to see Joker drop some beats.

With tracks from his new album, The Vision, along with his own remixes, and some mainstream dubstep for good measure, the gig was absolutely buzzing. Being right at the front, next to the massive speakers, you could really appreciate the seriously heavy bass (it made the hairs on my arms vibrate) and examine Joker’s mad skills close up.

This Bristol-based producer emerged on the scene during the purple (post-) dubstep movement. Joker (Liam McLean) infuses dubstep with grime, garage and R&B to create a fresh take on the genre. Dr Dre, G-Funk and Benga are among his influences, as well as video game chiptune music.

Joker started making music at 14, was DJing regularly a year later, and was dubstep’s greatest hope by 18, being named ‘2009 King of Bass Music’ by XLR8R Magazine. Since then he has churned out a stream of successful singles each one better and quirkier than the last. Now at just 22 he also has a debut album under his belt: The Vision.

His album has arrived after years of delays and false starts. It is definitely more pop-orientated than his previous work, with its countless featured artists and electro tones. Perhaps he is trying to follow the blue print set out by artists like Deadmau5, Daft Punk and David Guetta who have amplified their success by becoming part of pop-culture.

The first single on the album, Tron, with its synthetic wobble and thumping bass pulses, is the most heavily dubstep focused, and a classic Joker track. His next single, and my personal favourite, The Vision (Let Me Breath) featuring Jessie Ware, is excellent in so many ways; the jagged edge synth lines, the sonic twists, and the fattened up arcade game timbers. The final and most recent single On My Mind featuring William Cartwritght has a staccato synth beat reminiscent of Justin Timberlake’s My Love, further emphasising an attempt to mainstream. However the lyrics, “Rumour has it that you want a man with a big di-di- (wait for it) digital following” seems slightly out of place as it is presented without a hint of humour.

There is no denying that Joker works wonders on the dancefloor with these more upbeat tracks but the rest of the album rewards chilled out, funky tracks like Milky Way, My Trance Girl and Electric Sea. Slaughter House offers a crunchy synth melody, while Level 6 as the name rightly suggests, is an example of Joker’s obsession with video game loops, bringing with it a sense of nostalgia.

The Vision is definitely worth a listen, and if you’re a dub fan eager for more talent like this, live and up close, a trip to Brighton’s number one bass night is a must. This week it’s Emalkay and coming soon are Feed Me, Dub Phizix and the legendary Rusko will be returning on 21st March.